Rebecca R. Stone, PhD, received her B.A. in Art and Visual Perception from the University of Michigan-Ann Arbor, graduating Phi Beta Kappa in 1979. Her M.A. and Ph.D. in the History of Art from Yale University were earned in 1982 and 1987, respectively. Dissertation research on Wari tapestry tunics (600-800 CE, Peru) took her to 49 museums on three continents. After teaching one year at the Johns Hopkins University, she came to Emory as a Mellon Post-Doctoral Fellow from 1988-1990 and began as the Faculty Curator of Art of the Americas, a joint position she holds to this day. Hired in the Art History Department in 1990 to teach art from the United States southward before 1600 AD, she received tenure in 1996 and full professorship in 2010. From 2010-2014 she served as the Massey-Martin/NEH Distinguished Professor of the Humanities at Emory. Besides a number of articles ranging from West Mexican tomb sculpture to various aspects of shamanic art and ancient textiles, her books include: Threads of Time: Tradition and Change in Indigenous American Textiles, Michael C. Carlos Museum (with essays by Dr. Dorie Reents-Budet and Shelley A. Burian, M.A., and Elizabeth Caris; accessible at http://threads-of-time.carlos.emory.edu); Art of the Andes from Chavín to Inca, 3rd edition (World of Art series), Thames and Hudson Ltd., 2012; The Jaguar Within: Shamanic Trance in Ancient Central and South American Art, University of Texas Press, 2011; Seeing with New Eyes: Highlights of the Michael C. Carlos Museum Collection of Art of the Ancient Americas, Michael C. Carlos Museum/University of Washington Press. 2002 (under the name Rebecca Stone-Miller) [Winner of the Association for Latin American Art, 2002 International Book of the Year Award, awarded February 2003, New York City and Winner of first prize by the Printing Association of Georgia 2002]; and To Weave for the Sun: Andean Textiles in the Museum of Fine Arts, Boston, Museum of Fine Arts, Boston, Boston, 1992 (reprinted by Thames and Hudson, London and New York, under the title To Weave for the Sun: Ancient Andean Textiles, 1994) (under the name Rebecca Stone-Miller). 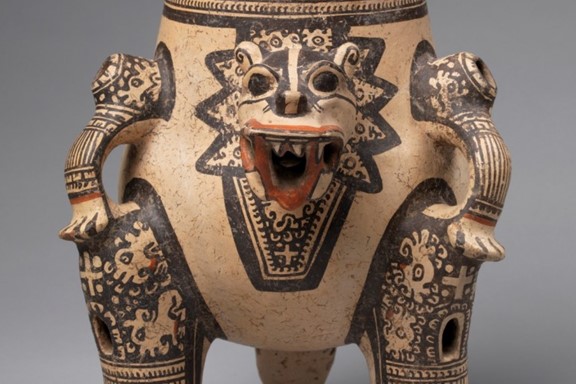 Empowered, Not Disabled: An Ancient Shaman Effigy Vessel at the Carlos Museum

In a sensitive interpretation of ancient artifacts, Rebecca R. Stone, PhD, explores how other cultures may..
Read More