Y.A. Warren experienced a stroke in June 2015. She lived in New Orleans, Louisiana, at the time and has been involved in rehabilitation since the onset. Currently, Ms. Warren lives in Marietta, Georgia, to be closer to family as she continues to recover from aphasia. She describes her primary problems as related to numbers, spatial skills, reading, writing, and speaking fluently (word recall). Writing is helping with her recovery, because with each thought she needs to process it by figuring out the symbols for each letter, make it into a word, then a sentence, and eventually to a story. This takes much energy and time, thus is tiring. Prior to her stroke, Ms. Warren began writing while a marketer and then as an editor assisting other authors. She has written two books on life in Appalachia. Additionally, she wrote “Eternal Spirit” during her husband’s long illness. (Ms. Warren’s stroke occurred prior to his death.) Her work can be found on her blogs (TnMtnHome.blogspot.com; OneFamilyManyFaiths.blogspot.com) and Amazon. Her two writings found in this issue are works created after her stroke. 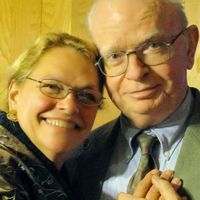 Sharing Spirits and Silence is Strength